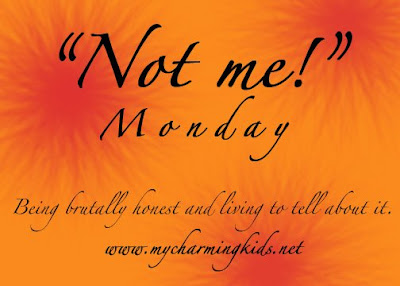 Welcome to Not Me! Monday! This blog carnival was created by MckMama. To see what she and everyone else have "not" been doing this week, you can go to http://www.mycharmingkids.net/
Lets just say the past week or 2 has been plum full of Not Me! incidents. So grab a cup of tea and sit back and enjoy my "misfortunes". :)
I often try to help Mark out as much as I can. Really, I do. This usually means mowing the yard. I enjoy mowing (unless it's 100 degrees, then not so much). Last week was just another ordinary time of mowing the yard.... that is, until I ran over a piece of metal sticking up out of the ground - later to be discovered that it's the ground wires to the house. Evidently the rain washed away the soil, exposing wires that had never before been seen. I never even knew they existed.... until I ran over them. Then the mower wouldn't work. Well, it did. It just sounded quite odd and scalped the lawn. Luckily it was merely a bent blade and was easily fixed. I mean, who does these things? Certainly not me!
Who ran outside for no more than 2-3 minutes and returned to find this in the living room floor? 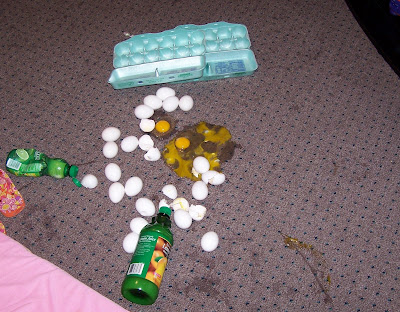 Certainly not me!!! (Eggs with lemon and lime juice anyone?)

Who's child dumped taco salad all over my brother and sister-in-laws floor? Not mine! (Ahem, Anna).
Who was in the middle of a conversation andd not paying attention to their daughter saying she needed help turning a light on (for the record, she didn't. she's incredibly tall and can reach about everything and I don't like to promote her interupting conversations)? Certainly not me. And who after she became more frantic finally got up to 'turn the light on' only to find water billowing out of the bathroom sink into the floor? Oh no, I assure you, not me! (It took like 10 large towels to clean it all up....)
While out to eat at Chili's for my brother-in-laws birthday, whose son had an absolute meltdown because I tried to wipe his nose? Most definitely not mine! Who then had to take him outside for his continued tantrum only to hear "I've been there!" while walking out? Nope, not me. My kids are always on their best behavior.
Who took Anna potty before leaving for Chili's as to not have to be interrupted during dinner with "I have to go potty" only to hear it anyway?? Who then took her potty, again? And then who had to run to Walmart immediately after eating to pick up TWO (yes, count them, all of TWO items) only to hear, again, "I have to go potty." Who then dismissed this as a mere crying wolf statement? Oh no, not me! Who then heard "Mommy! Uh oh. It's an accident." only to look down and see pee dripping down her legs and a huge puddle in the fabric department of Walmart? Ugh, say it wasn't me! Who then was further embarrassed by a couple waiting to have fabric cut then becoming onlookers? Onlookers to a scene that could've played out in a hit comedy of the year with my daughter slipping and falling in her own pee....twice. Please oh please, say it wasn't me.....
Us and some friends drove an hour and a half to eat at a hole in the wall BBQ place that is worth every minute of the drive and every penny of the gas! Anyone else think that good food is worth a 90 minute drive? I do! I mean, no, certainly not me.
Who laughs so hard they cry over ridiculously rude McDonald's employees? Not me! Seriously, these people were so incompetent (and no, I'm not saying fast food workers are incompetent, rather that just these particular ones were) it was ridiculously funny. I died laughing and continued on for the entire 15 minutes we had to wait in the drive-thru due to error after error, lack of common sense, and them trying to be rude but only being funny. Loved it! Best laugh I've had in months!
And finally, who during a yard sale has a daughter that randomly began asking people to give her money? Oh no, not me! (She made $1 that way and also gleaned an ink pen). Who also has a daughter that asked a yard sale guest if all 6 kids bouncing around in the SUV were hers? Nope, not me. My kids never embarrass me!
Anyone else have some Not Me! moments? Feel free to share them and join in on the fun!
Posted by Phoebe at 7:14 AM

Email ThisBlogThis!Share to TwitterShare to FacebookShare to Pinterest
Labels: Funny, Not Me Monday