I want what most mothers want. For their kids to be happy and healthy, to be obedient, and to grow up to be adults who love God and His word. If I'm honest, this is often a struggle. It takes a lot of work. You have to be really diligent and consistent and in recent weeks I haven't been. After attending the Women of Faith conference last weekend (which I'll post more about later) I resolved to be better. To be a better wife, mom, and a better me.

Every since then, I've been met with obstacle after obstacle trying to hinder me making the changes I feel God wants me to make. Isn't it amazing how Satan decides to come out full force when we decide to start doing better?

Well, today was no such exception. After the kids made a huge mess transferring water from the bathroom to Anna's room via her kitchen pots and pans while I was working on something for the church, I determined I would not lose my patience. And I didn't. I cleaned up the mess, disciplined them, and then removed every single kitchen related item from her room (pots, pans, utensils, aprons, pot holders, play food, etc), including the kitchen.

Later on, her and Eli had absolutely destroyed her room and had toys everywhere. I expect this. They're toddlers. It's normal. But when I say "Please pick your toys up" I expect them to listen and obey. I followed with "Every toy that's not picked up will become mine for the day."

After a few minutes and ample time for them to have picked the room up, I returned. Nothing had been done. I expected to pick up some toys, just not near all of them. But a rule is a rule and I was determined to follow through with what I had said. And so I did. 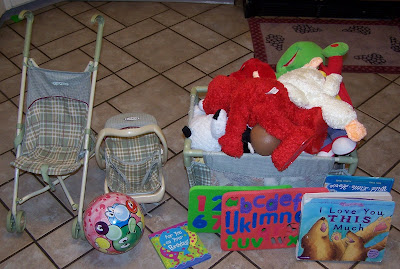 All of these plus her kitchen and all it's accessories are now gone from her room. She still has a toy box of stuff to play with, which tells me she has entirely too much stuff (any other parent deal with this?). But the reality is that I want them to know a variety of things.

1. When Mommy says something, she means it.
2. I not only should obey, I should want to obey and even if I don't, I should do it anyway. This goes to a deeper issue of the heart.
3. There are consequences for my behavior, or lack of behavior.
4. Obeying Mommy and Daddy is what God wants me to do.

Do I do this to be mean? Not at all. I actually feel sad that she has very little to play with all day unless she raids Eli's room. The reason I do it is so that they'll learn the bigger picture. It's not always just about a messy room. It's about learning to obey and all that that entails (trusting Mommy and Daddy know best, obeying the Bible, trusting that God knew what was best for them when the Bible was written, that the Bible is still relevant and what we go by, and simply learning to follow rules which will go a long way in life).

I deeply want them to be obedient, not just because it makes things easier on me. But because it's honest to goodness what is best for them now and in the long run. I love them too much to not teach them obedience and respect... not just for us, but for other adults and authority figures.

And it's not about me always having to be in control. Just the opposite (although this used to not be the case). I want them to learn the control that they have. The control they have to either avoid or bring about the consequences of their behavior. I want to let them make choices about what they wear, which veggie they want for dinner, what movie they want to watch... Because part of raising children is also teaching them how to make wise decisions and then laying out for them the consequences of those decisions. I'd be naive to think that I'll always have control over them. I won't. So instead, I choose to help them learn how to make the best decisions possible. Be it what veggie they want, or be it picking up toys so they don't have them taken away for the day.

I simply want what's best. And even when it's hard, I'm going to try my hardest to still do it. Because I not only have to, I want to.
Posted by Phoebe at 10:04 AM