Then the Lord said to Moses, "Write this as a memorial in a book and recite it."  Exodus 17:14

Many times throughout Scripture, an emphasis on writing things down, remembering them, passing them on to your children, etc is heavily present.  We can see this time and time again when reading through the account of the Israelites, their freedom from Egypt, and during their time of wandering in the wilderness.  They took their eyes off of God and instead focused on the problem, which inherently led to them forgetting all God had already done for them.  It's no coincidence then that God instructs them to keep a jar of manna to be kept throughout the generations as a reminder of how He fed them all their years of wandering.  Or when he tells them to write all He'd done as a memorial in a book.

So often I'm tempted to see the giants in front of me instead of the Faithful God before me.  And as I've been leading my T2 girls through the account of the Israelites, I continually keep seeing God reminding them to write it down.

So here I am.... writing it down.  Because right now, there are things which I'm waiting to see how God works out.  I worry over exactly how it's going to work out, how long it's going to take, and what all life will entail in the meanwhile.

Oh how He's always been faithful.  I can look back over losing our babies and see how His hand was with me through it all.  I can look at total betrayal from a group of people and how He used that to move us where we needed to be.... to a place where we are accepted and loved and cherished.  I can see how He's worked in and through the lives of my friends and family.  And just this summer, He absolutely blew me away time and time again.

You see, I had been debating whether or not to get licensed as a counselor.  I had gone through the process 12 years ago after graduating from Graduate school but God put other opportunities in front of me that kept me from taking the test to move forward. And as I result, I was able to be on staff at a church for close to 9 years as their Biblical Adviser.  After taking a break since having Emilee and adopting Chi, I was offered a job....that would require me to get licensed.  And once again I was faced with a decision.  And I battled it for quite awhile on whether or not it was something I wanted to move forward with when God yet again stepped in.  Everything worked together where I was offered a job at Central as one of their Biblical Advisers - a job I had previously told Mark would be my dream job.  And here I am, every week getting to meet with teens and young women and am continually blown away by God's goodness at allowing me to do what I love - sharing how the Gospel changes lives.

But then God was also working in the lives of our friends, laying me and Mark on their hearts as who they should reach out to about buying their house.  She reluctantly sent me a message and said "I hope you don't think I'm nuts..."  We weren't even looking for a house, but little did she know we had been discussing "if we happened to find something."  Little did she know the struggles that our boys, each with their own diagnoses plus a 7 year age gap, faced sharing a room.  Oh the battles we'd been dealing with.  And now here we are in a different house, each kid with their own room, and dealing with substantially less fall out as when having our boys in the same room.

As if that wasn't enough, one Sunday morning Bro. Archie was preaching through Revelations.  I knew it struck a cord with Eli because he's our history buff, particularly on wars.  So when he started talking about Jesus' return, the battle that will ensue, etc., he perked up....and the rocking stopped.  As soon as invitation began, his rocking resumed and increased in intensity.  He said nothing.  He went to class.  And afterward, as we loaded into the car and began getting situated, I hadn't even put my seat belt on before he abruptly said "I need to be saved!"  It was as if if he didn't say it right then, it wasn't going to come out.  And so we talked on the drive home, me ensuring he fully understood, that he realized this wasn't a prayer but rather a lifelong decision to follow in obedience.   That no prayer has ever saved anyone without the faith behind it. And there in my bedroom of our previous house, I led him to Jesus.  That God would allow me that privilege.... You see, last fall/winter was really rough with Eli.  He had gone downhill quickly: academically, behaviorally, emotionally.  We were at a loss.  The lashing out.  The downright brutal things he would say that would crush my spirit as a momma....as his momma.  But God.  He allowed us to figure out it was a medication issue and through a series of trial and error to find something that worked better with his growing body.  To have gone through that together and to come out on the other side with him coming to me.  Grace.  Nothing but grace.  And to top it all off?  Mark got to baptize him in the 11 Point River... one of my all time favorite places and now one of Eli's too. 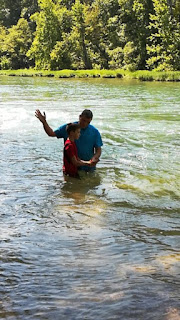 May I never forget.  Mercy on mercy.  Grace upon grace.

He has always been faithful.  He can be trusted.

I don't know what you might need to write down, what promises of His faithfulness that you need to call to mind, but might I encourage you to take a minute to do so?  It's in our remembering that we have the faith to keep our eyes on Him and to trust that He's not only been behind us, but is before us (Deut. 31:8) and beside us.

Write it down.  He has been, is, and will always be faithful.
Posted by Phoebe at 11:37 AM

Feeling Broken? Break a piece of pottery, then spend time with Jesus as you piece it back together, reflecting on how He does just the same with us when we feel broken and shattered. Read the full story here.