The Storm Behind the Front

Sometimes I think people look at us and think we have it all together.  Like we're some sort of super family that doesn't face the same struggles and battles that everyone else does.

I think people can look at our pictures on Facebook and think that that's all there is to see.

You see, we've recently just come out of a storm, are presently in a storm, and recently just found out we'll be heading back into likely the strongest one we've ever faced.

When we chose to adopt we knew we'd face battles - that Satan would come at us like never before.  But if I'm being honest, while I knew this, I wasn't prepared for it.  I was naive and completely and utterly caught off-guard at the extent to which the enemy would go to break me down.

And he used me to do it.  You see, since having Emilee I've been battling a variety of different things with my health.  I've been passed from one doctor to another, none of which (until recently) have genuinely tried to help.  One put me on a prescription that I readily took without any regard to its side effects.... because I didn't even take the time to look them up.  I just wanted relief.  And it cost me dearly.  Because over the course of 12-15 months I slipped into the darkest days of my life, which also happened to be right around the time we brought Chi home.  His first year with us was spent with me being all over the place, me and Mark arguing because of the state I was in and my subsequent responses and actions to everything.  I questioned everything.  The adoption.  Our marriage.  Being a mom.  And as I previously wrote about in this post, I even began to think that giving up on life was the best choice I could make for everyone.

Satan had so distorted my mind and thinking that it was hard for me to distinguish between reality and his lies.  I had been doing the Armor of God Bible study and learning how to truly fight, yet I found myself slipping back to where I had been.

Sweet friends, I believe with all my heart that it was the prayers and petitions of my family that kept me here and brought me out of the pit of despair.  And truthfully, very few of them knew the extent to which I was suffering and battling myself, yet they prayed all the more.  And I began to petition and beg God for mercy, to restore my mind and bring healing.

And one day as clear as if He was standing before me I heard Him whisper, "Read the side effects."

I thought it was a weird answer to what I was asking of Him but I did it nonetheless.  And there it was.  The medicine I was taking can cause severe depression and suicidal thoughts.  So much so that the medical community termed a phrase "*medicine's name* induced depression."

I stopped the medicine that very day.

Within two weeks I began noticing a difference.

Within a month I knew God had not only heard my prayers but faithfully answered them.

Now 3 months later I finally feel like myself again.

I feel like I can be the mom that God has called me to be to my children.  And I feel like I can love and bond with Chi in ways which I wasn't previously able.  We have made leaps and bounds of progress just in the past 3 months that I can't even describe.  Gracious how I love my kiddos.  How we have such sweet times together.  And I love as I leave their rooms at night how they'll ask for me to sing to them.  How Chi reaches his hand up for me to hold or how the girls sing with me.  Oh how I missed so much in the past year.  My heart aches at the thought of just how much time I lost.  How we faced so many battles from people who talked about us instead of prayed over us.  Yet He has been faithful through it all.

We left that storm only to be in the somewhat constant storm of raising a child on the spectrum.  Yes, Eli is high functioning, so much so that he can be trusted with a gun and out in the woods.  He's quite the little hunter.  But y'all, it doesn't negate all the battles we face with him that are often unseen to the outside world.  We have been on our knees in prayer seeking answers and guidance on how to best help him.  We make strides in one area only to see him revert back to behaviors he had previously stopped (like head banging).  Yet we persevere and love and guide and continue praying that God would work in and through not only us, but our sweet Eli.

And the storm that's brewing?  It seems to just be building momentum.

And so I ask that y'all would be praying for us, for the protection of our family and children as we enter the approaching storm.

You see, we knew Chi had medical conditions when we adopted him.  We knew that he'd be facing another open heart surgery when he was around 4 or 5.  But we were led to believe that'd be it - that this 2nd surgery would fix everything and he'd go on to lead a normal, healthy life.  But our world was shattered Friday when we saw that his oxygen levels were already down to 84% (although we suspected they'd be lower because of his worsening shortness of breath).  And then that led to being told that his surgery would be sooner than later.  And then that led to being told that most all children who have what he has will at some point need a heart transplant.  I felt like the air had been knocked out of me.  I was trying to process all that was being said and still listen to what she was telling us about the procedure and upcoming appointments but everything just seemed like a whirlwind around me.  I mean, he's healthy (other than the shortness of breath).  He's a normal kid.  No one would know anything if not for him becoming winded easily.  I mean, why won't the second surgery fix it?  Why have things changed?  Why couldn't we have seen his normal cardiologist so we could ask these questions?

And yet I looked at him with all those wires hooked to him and knew in those moments that I'd do any and everything possible for him.

Right now nothing is urgent.  They don't like to do surgeries in the winter if possible, and he's healthy and maintaining well enough that we can wait even until early summer, which is the plan.  He'll have another appointment in mid spring, then a heart cath in late spring to make sure all the pressures in his heart and lungs are good and then open heart surgery a few weeks after that.  And no one knows when the transplant will be needed, be it 2 years after the surgery or 20.  It's simply based on how him and his body respond.

I'd like to say I'm not anxious about this, but I'd be lying.

But it does bring a lot of fear.  Obviously for his health and safety.  But also for how our other 3 kids are going to handle it all...handle our divided attention, being separated, seeing him like he'll be after the surgery....

But HE is faithful.  Time and time again He shows me just how faithful He is. 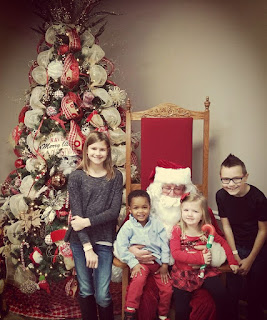 and think that we have it all together...that we're the perfect family, I want you to remember this:

You see the front.  We see the storms that have made us who we are.

We have an incredible family.  Mark and I have a great marriage.  We have friends and family that love us and cover us in prayer.  BUT we are who and what we are ONLY by the grace of God alone.  It is HIM friends.  It is HE and only HE who has enabled us to be and have the family that we do.  HE alone is faithful.  HE brings healing and peace and joy amidst the trials and storms of life.  It is only because of His grace and mercy that we have made it this far.  And hear me when I say this:

I believe with every fiber of my being that He will see us through everything we're about to face.

Because He's never not done that.  Yes, we've lost two babies.  Yes, we've had times I didn't know if we'd make it.  Yes, we've watched friends bury their sons.  Yes, we have one son on the spectrum and one facing a possible heart transplant.

But HE IS GOOD.

I hope that no matter what you're facing in life that you can plant your foot on solid ground and say with us that no matter the storm, He'll be the way.  And if you can't, please contact me.  I'd love to tell you how He can bring you the peace for which you're seeking.