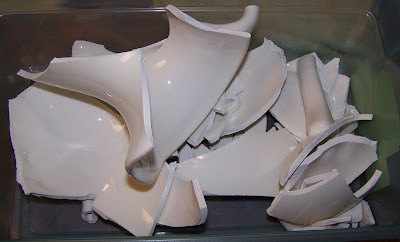 I feel broken, just as I did the first time I wrote this post. It's one of those times in my life where not only do I feel like I have no control over anything, I'm overtly aware that I've never really been in control of anything.  It's always been this way and I've always known it. God is the only One in control, yet I've always managed to at least feel like I am on some level.

So much for "Happy New Year!".  This year got off to a bad start and unfortuntaely has just been progressing in such a fashion.  To be honest, it's not just the past several weeks, but rather the past 10 months.  It's been difficult for me... for my family. I know that God is a God of hope, which has been what I've clung to here lately and is what He's slowly revealing to me. I know that He has plans for me, for these situations, and for all that has been and is going on. Plans to prosper me and not to harm me, plans to give me hope and a future (Jeremiah 29:11).

But if I'm honest, there are times that I don't like His plans. I'm incapable of seeing past the present into His infinite wisdom of the good He intends to bring out of this and in my human nature only want the pain, the loss, the division to go away.  I'm selfish and I just want my baby back, to have seen my Grandpa one last time, to not feel such grief for my friends who lost their baby 4 days before their induction was scheduled, to not have bills piling in from Mark's hand surgery and my appendix rupturing, for Mark's grandma to be up and walking again, yet she's not, to not have felt the pain of our baby's due date amidst all these other trials.  I'm selfish like that, selfish because in some weird way, I still can't see past my pain and have a clear picture of what God has in store, even though I know it's better than anything I could imagine.

Every since coming across a certain 'therapeutic technique' on Angie's blog, I've been assigning it to some of the people I work with who are going through difficult situations in their lives. You very likely have seen the button on my sidebar about this. The point is to break a piece of pottery, or something similar, and then spend time with God piecing it back together as you reflect on how when we feel broken and torn apart, that He very similarly puts us back together. Despite having recommended it numerous times to numerous people, I must admit that I'd never truly gotten the importance of this until I did it. And the process was nothing less than amazing. 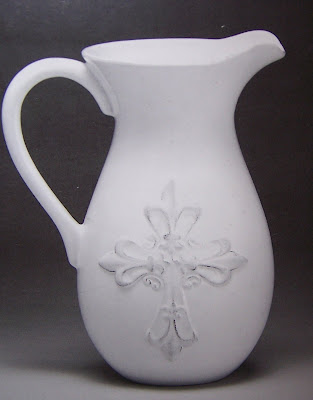 I found this pitcher at a discount warehouse and thought it was beautiful, and better yet, it was quite cheap. After all, who wants to spend lots of money on something they're about to break? And break I did..... eventually. I found myself standing there holding this pitcher, hearing God speak to me, saying "Okay, now let go." Yet I couldn't. I didn't want to break it. I didn't want things to be out of my control. Again, I heard God saying "Break it. It's okay." I couldn't help but think of how I don't like being broken. Who does? This little, insignificant pitcher had now become anything but insignificant. It was representative of me. A tired, sad, and weary me. A me not wanting to be broken. "Break it. Nothing is beyond My repair." And so I did. Then I stood there starring at it knowing just how good and well it was representative of how I've been feeling the past several months. I picked up the pieces, took them inside, and began the lengthy process of piecing it back together again. 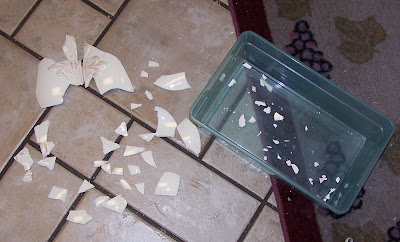 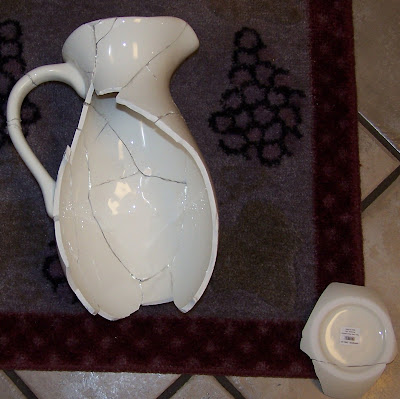 It was a painful process, physically, emotionally, and spiritually. There were numerous times I burnt myself with the glue gun, times I cut my fingers and hands on the shards of glass, and times God spoke so clearly to me that it was hard to comprehend His unfailing love for me. Hard to remain angry with Him for everything that's been unfolding.

There were times I would get frustrated and ask the pitcher, "Why are you being so resistant? Stay put." And then God would say "Why do you always resist Me? Why do you say no to the things I ask you to do?" And I found myself speechless.

I wanted my pitcher to be beautiful. I wanted it to look as flaw-less as possible for something that just got shattered. Super glue would've done the job better. It wouldn't have left as many cracks and crevices. It would've restored it to a more beautiful re-creation. He'd whisper "Are you more concerned with outer beauty than with being restored? Do you care more about how others see you than how I do?"

There were so many tiny pieces that I couldn't figure out what to do with them. I couldn't match them anywhere. There were holes. Pieces were missing. They were gone. Gone... just like our sweet #3. Gone... just like my grandparents. Gone... just like our friends' baby.  I couldn't fix the holes. "But I can." I wanted it to look beautiful and it wasn't. "Who says it's not beautiful? That you're not beautiful?" I wanted all the pieces there. I want my baby back.  I long to have held him or her.  And the lingering questions ... they plague me.  My heart aches for my friend's grieving the loss of their son.  I long for things to have been different with my grandparents.  I want to feel whole again. But the pieces were just missing and there was nothing I could do to fix them. "And that's okay. Give me your burdens. Let me carry them."

And it was then that I knew that when we're broken, we're never truly restored to our original condition. People die and a part of us is gone. People hurt us and we close ourselves off a little more. Pieces of us are missing. And although pieces are missing, we try to hide it. We try to carry the burdens alone. We try to show people the 'pretty' side. 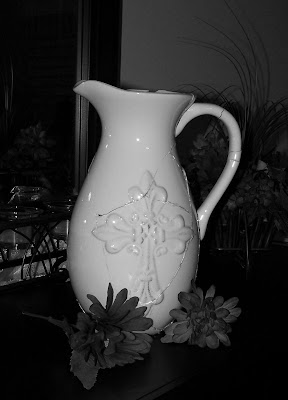 When all the while God is whispering, "The broken side is just as beautiful. Can't you see it too?" And indeed it is. 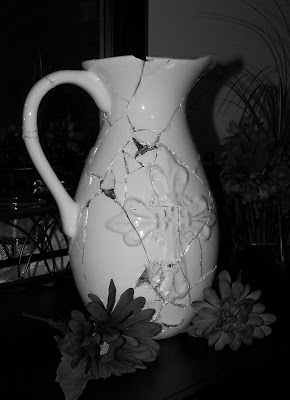 Pieces of me are missing. But I'm still holding on to the hope that God has something amazing in store for all that has happened recently, for all that has brought me to the place where I am. Feeling broken... yet marvelously being restored.
Posted by Phoebe at 4:02 PM