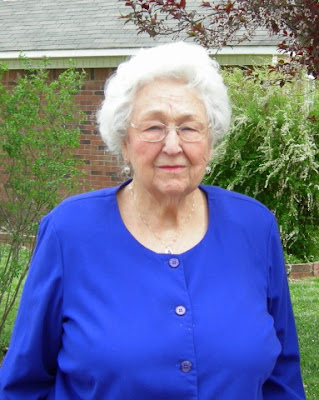 Last Wednesday as Mark and I were browsing the internet trying to make arrangements for our upcoming trip to D.C., I received the phone call that my grandma was unconscious and unresponsive. I pretty much knew at that point that she had already gone to be with Jesus, but there's always that smidgen of hope that something could be done. 30 minutes later I got the call confirming she had died of a massive heart attack. Within a few hours, we were back in my hometown to be with my family. It was hard. It was hard to walk into my grandparents' home knowing that she wouldn't be there. It was hard to see my Grandpa and know how much pain he felt. It was hard to see my mom withdrawn and brokenhearted. It was hard to know that the upcoming days wouldn't hold much more refuge. It was hard.
Over the past week God has shown me so much grace that I don't really even know how to explain it. While the days have been long and hard, He's been right there with me, making them bearable and allowing me to see and remember the good about my Grandma. He's comforted me and through her passing has only made Heaven all the more sweeter.
So many friends, churches, neighbors, and acquaintances brought food, came to visit, and attended the visitation and funeral services. It was nice to see how many other people loved her just as much as we did.
If I may, I want to take a moment to brag on my husband. He was asked to help with the funeral service and he positively couldn't have done a better job. He was wonderful and personal, adding the right amount of humor combined with the utmost of respect and honor for her. She would have loved it, as did we.
I also want to publicly say how much I love my in-laws. They're always good to me, but the past week they've outdone themselves. Be it watching the kids so we could go pick out flowers, check in on my grandpa, taking the kids home from visitation so we didn't' have to keep up with them, or even coming to the funeral to watch the kiddos yet immediately leaving with them due to their rowdiness, they were there and willing to do whatever was needed. I've said it before, but let me say it again, I couldn't have asked for better in-laws. Thank you, thank you, for all you've done.
Over the course of my lifetime, my Grandma taught me several things. Here are just a few of them.
She taught me how to be frugal.
As a kid, I remember always sitting and watching my grandma bake goodies. It was my hope that when she was done, that I'd get to scrape out the leftovers in the bowl or get to lick the beaters. This was wishful thinking on my part. Being a child of the Great Depression, my grandma learned quickly not to ever waste anything. She was a pro at scraping every last bit of dough out of the bowl and this was before the days when Pampered Chef had these little goodies. 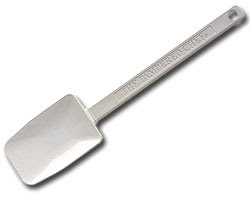 Our "helping skills" were also limited within the kitchen when it came to peeling potatoes. Evidently, we were too wasteful and cut more off than just the peel. With age came better skills and we were eventually actually more helpful than in prior days gone by.

My grandma was known for recycling things. Things such as the plastic bags out of cereal boxes. She would wash them and use them to roll her pie crusts out on. She would also wash and reuse zip lock bags and foil. And not because she financially had to but merely because to do otherwise was wasteful in her eyes.
In recent weeks, we had talked about finances. She passed on to me her wisdom of being prosperous ... not to have any debt if at all possible. It's good advice and lucky for me, we already adhere to that philosophy. Her and my Grandpa started out with $5 in their pockets when they got married and built everything they have from the simple principles of work hard, spend less, save more. In a society where very few people get this and the notion of being frugal, it was nice to find refuge in knowing that she did.

She taught me the importance of laughter and a sense of humor
My grandma was known for loving to laugh. She enjoyed having a good time, cutting up, and a hearty belly laugh. She would often laugh so hard that she couldn't stop. She'd put her hand on her chest as if to show that it hurt to laugh so hard. Yet she kept laughing.

She was known for her sense of humor and mischievousness - which is where I credit a lot of Anna's from. As a child, her and her sister were told not to pick a particular apple from the apple tree. It was reserved for an apple pie my great grandma had been planning to make. So they didn't pick it .... rather, they climbed the tree and ate the apple then left the core hanging there. Could you ever imagine that this is where Anna gets it from?

She taught me to love old hymns
Years ago when I was a kid and my grandparents still lived out of state, I would often spend the summers with them. I was shy when it came to doing anything publicly - even if it was family. My grandparents would often pay me a quarter to play the piano for them. They would pick hymns for me to play. It was through this strategy that I came to love playing hymns and have a deep appreciation for them.

My grandma would often sing as I played. This continued on even after they moved down here to be closer to us. I would often go by after I got out of high school and visit with them. I recall a particular day of playing the piano and Grandma singing "In the Garden". She told me she used to sing it with her mom and that it was her favorite hymn - so we played it at her funeral.

She taught me to appreciate the beauty of flowers and plants

Anyone who knew my grandma knew how much she loved flowers and plants and working in her garden. She used to grow so many flowers that she would sell them out of her garden. I have mums and irises that she gave to me from her garden, as well as a baby's breath plant. While I certainly appreciate their beauty, I'm not known for my green thumb. My gardening skills are at a minimum. I only wish I had the talent and skills that she had.

She taught me how to keep a secret

Everyone loved my Grandma's chocolate chip cookies. It's one of the things I always looked forward to when we'd go to visit. Oftentimes, as soon as you opened the door you could smell them cooking. I often wanted her recipe, to which she replied "It's a secret." It wasn't until last year that I actually got the recipe.

She taught me commitment

My grandparents were married 66 years. If that's not commitment, I don't know what is. She taught me to stick it out even during the hard times. To rely on each other for strength and to let the little things go. She knew how to take things lightly. One of the funniest things I remember is when she decided to stop dying her hair. My grandpa evidently thought the transformation took too long and said "Marie, if you don't do something with that hair, I'm going to divorce you." She laughed and laughed and laughed... and then we did too. It eventually grew out snow white and she still looked just as beautiful. 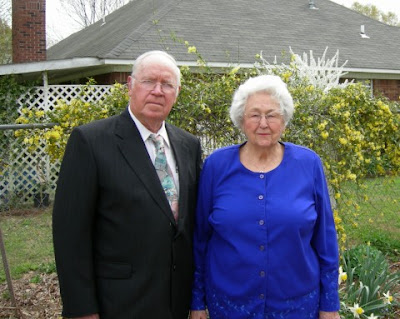 Most importantly, she knew the commitment of praying. She spent the majority of her life praying for my Grandpa's salvation. At the age of 79 he accepted Christ and was baptized. What more of a tribute could be given to such a woman? I dare say none.

I love you Grandma and miss you every day. I pray that you're finally embracing your son, basking in God's presence, and enjoying all of the wonders of Heaven. Until we meet again...