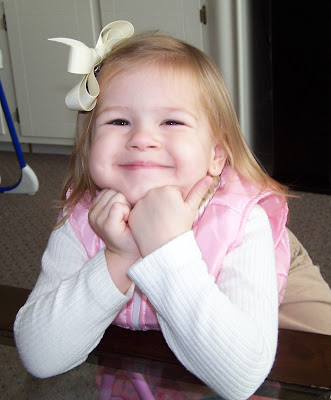 Mark and I have been trying to gradually re-introduce Anna to the morning worship service. She's just a few months away from being three and since she's able to understand and follow instructions, we feel it's time for her to begin transitioning into the sanctuary.

This past Sunday was one of our 'gradual introductions'. She typically does quite well during the singing, then gets antsy during the sermon. She's been coaxed with the promise of suckers and peppermints, which will typically keep her quiet and still. Sunday morning she was showing great progress, sitting still, and thumbing through a hymnal as though it were a story book. And I'm okay with this. She's two after all. When she's 4 or 5, maybe not so much. She was content with her 'story book' and thus I was content. That is, until our pastor began asking rhetorical questions.... questions that Anna thought she was to answer aloud. It went something like this.
"The Bible says that Jesus was intimate friends with Lazarus, Mary, and Martha. When he was in town, he would dine with them at their house. Isn't that amazing?!"
Anna: "YEAH!!!!!!" (in the loudest voice she could possibly muster up).
Church Members: *Mass amounts of laughter*
Mark and I: "Anna, you have to stay quiet. No talking." (all the while, I have no doubt that I was bright red from embarrassment."
Another question was asked. She shouted out "No!"
Then he went on to talk about Jesus lingering 2 days at the word of Lazarus being ill, and how odd that might seem to us. He asked "Was Jesus crazy? Had he lost His mind?"
Anna: "YEAH!!!"
And once again, laughter filled the sanctuary.
I kept telling her that rhetorical questions aren't meant to be answered.... as if a 2 year old understands what a rhetorical question is. And what happened next? She began to get antsy, moving around, not wanting to sit still or quiet. Why could this be? Had we possibly crushed her little spirit? All I cared about was her being quiet and sitting still so she wouldn't disrupt others or the service. But she was (or was she?) and for that I was embarrassed. But the more I thought about it and from the mass amounts of comments we got after church, I realized something quite profound. She was listening! My sweet Anna was listening to what was being said, taking it in, and even understanding enough to answer rhetorical questions (albeit one was completely wrong)!
Is this something I want to promote? Not at all.
But above all else, I don't want to crush her spirit.
I want to mold it and shape it.
I want her to understand, yet listen quietly.
I know this a process. A process in which I hope to think more about her spiritual growth than my embarrassment. I'm sure we'll likely try bringing her back into the services again in the near future. And probably with the lure of suckers and candy. But if nothing else, life is a big learning experience - a process which I'm proud to help her journey though... embarrassment and all.
Posted by Phoebe at 8:45 AM